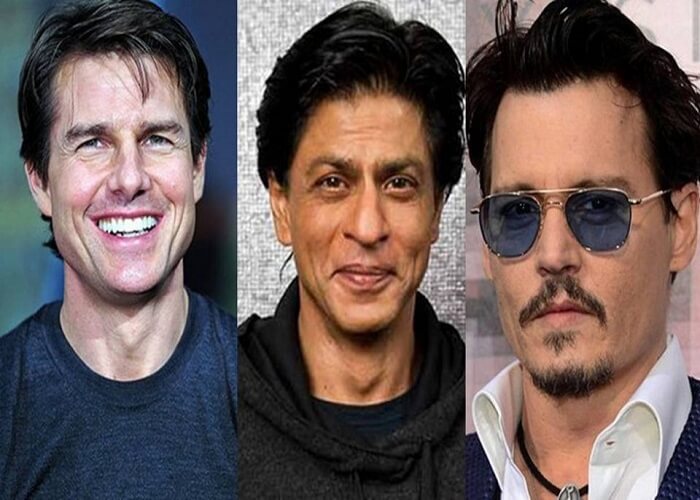 When it comes to naming the greatest actors in the world, there will be a lot of arguments among the fans of both Hollywood and Bollywood. Some actors took years to build up their reputations around the world like Shah Rukh Khan, Keanu Reeves, and Leonardo DiCaprio. When it comes to being the most famous actor in the world, a single name cannot do justice to the contributions of other actors.

There are a lot of things that are taken into consideration when people choose the most famous actors in the world. We have made a list of famous actors who are currently regarded as the most successful and famous in both Hollywood and Bollywood.

The Manhattan, New York-born actor Robert John Downey Jr. born on the 4th of April 1965 kick-started his career at a tender age of 5. He first featured in Pound(1970) which was directed by his father. Robert Downey Jr has had a tumultuous career and life for more than a decade. However, his character as Tony Stark in the Marvel Cinematic Universe and Sherlock Holmes film franchise has made him one of the most famous actors of Hollywood in the world. He recently featured in Dolittle

John Christopher Johnny Depp II is an American actor, musician and a producer who is regarded as one of the versatile actors of the present-day era. He is a man of several talents and has procured Golden Globe Award, Screen Actors Guild Award. Some of his most notable roles are Pirate Jack Sparrow in Disney’s Pirates of the Caribbean series, Sweeney Todd, Nightmare on Elm Street, Edward Scissorhands, and Charlie and the Chocolate Factory.

Thomas Cruise Mapother IV aka Tom Cruise is a New York-born actor as well as a film producer. Throughout his career, Tom Cruise has received several accolades for his contribution to Hollywood such as Golden Globe Awards, and he has also been nominated for Academy Award around three times. Tom is also one of the highest-paid actors in the entire world. Some of his famous works are Minority Report, Jack Reacher, Top Gun, Rain Man, Jerry Maguire, A Few Good Men and one of the successful Film Series in the world, Mission Impossible.

Shah Rukh Khan is a notable Indian actor who has been one of the influential actors of Bollywood. Given that SRK has not done any Hollywood or foreign film, he ranked as a famous actor in the world. Shah Rukh Khan is also considered as the King of Bollywood for his groundbreaking acting skill and on-screen romance. Throughout his career, King Khan has done more than 80 films and he has received several awards for his enthralling performances. Shah Rukh Khan is also considered to be the richest actor in the entire world. Some of the popular films of SRK are Baazigar, Darr, DDLJ, Devdas, Raees and Chak De! India.

Chris Hemsworth is one of the newest actors in Hollywood who has become a household name across the world as Thor Odinson in the Marvel Cinematic Universe. His character in Home and Away as Kym Hyde gave him direct entry to Hollywood and soon he began to work in some of the notable Hollywood franchises such as Men in Black, Star Trek, Marvel Cinematic Universe, and Ghost Busters. Hemsworth has featured in movies such as In the Heart of the Sea, Rush, The Cabin in the Woods, Blackhat, among several others.

The ‘Indian Jackie Chan’ aka Akshay Kumar is currently listed as one of the highest-paid actors in Forbes. Akshay Kumar started his career in the 90s and became a household name in India with daredevil stunts in action-packed films. Before becoming an actor Akshay Kumar worked in Bollywood as a stunt actor and he is considered as one of the best cooks in the country. His career has spanned more than 29 years and he has appeared in more than 100 films such as Ajnabee, Garam Masala, Airlife, and Rustom.

By the looks of it, Leonardo Wilhelm DiCaprio is one of the topmost actors in the world in terms of acting skills. DiCaprio has around three Golden Globe Awards attached to his name. The most versatile as well as creative actor is remembered as Jack in the James Cameron film Titanic. DiCaprio is not only a top-ranking actor rather he is also one of the highest-paid actors in the entire world. He has shunned the audience with his acting prowess in Wolf of Wall Street and The Great Gatsby. After a long wait, DiCaprio finally received an Academy Award back in 2016.

When it comes to being the highest-paid actors in the world, Dwayne ‘The Rock’ Johnson is at the top of the list. Johnson doesn’t need an introduction like any other actor in the business, he has had a versatile career as a wrestler and an actor. Throughout the years, Johnson has accumulated several awards as a wrestler. Moreover, it was his wrestling career which made him get into Hollywood without breaking a sweat. Currently, he is one of the most popular actors in the world. The most distinctive thing about Johnson is that he has a great physique and a charismatic personality. He is popular for his roles in the popular Fast and Furious as Hobbs, San Andreas, Hercules, and Rampage.

Amitabh Bachchan’s career as an actor is said to be ever-lasting, the veteran Bollywood legend is still working as an actor and a host. Given that Mr Bachchan has featured in 150 films throughout his career and alongside the most visually appealing films of Hollywood, The Great Gatsby based on F. Scott Fitzgerald’s novel of the same. The 73-year-old actor is much busier than the actors younger to him and that is why he is one of the most-inspiring actors to ever walk on the Earth. Mr Bachchan is regarded as the first-ever Angry Young Man of Bollywood and Francois Truffaut, the notable French Director once called Big B as the “one-man industry.”

Will Smith is a notable American film producer, actor, and popular rapper. Will Smith became a millionaire even before he was 20 years old. Will Smith is popular for his roles in film franchises such as Men in Black, and Bad Boys. On the other hand, he gained insurmountable prominence in America after joining the cast of The Fresh Prince of Bel-Air. Some of the other films which made Will Smith a popular actor are Focus, Independence Day, Gemini Man, After Earth, and the DCEU film, Suicide Squad.